Learning how to blind bake a pie crust is an essential skill to master for the art of making pie. It may seem intimidating, but it's quite simple to do! Following these simple directions, you can become an expert in no time! 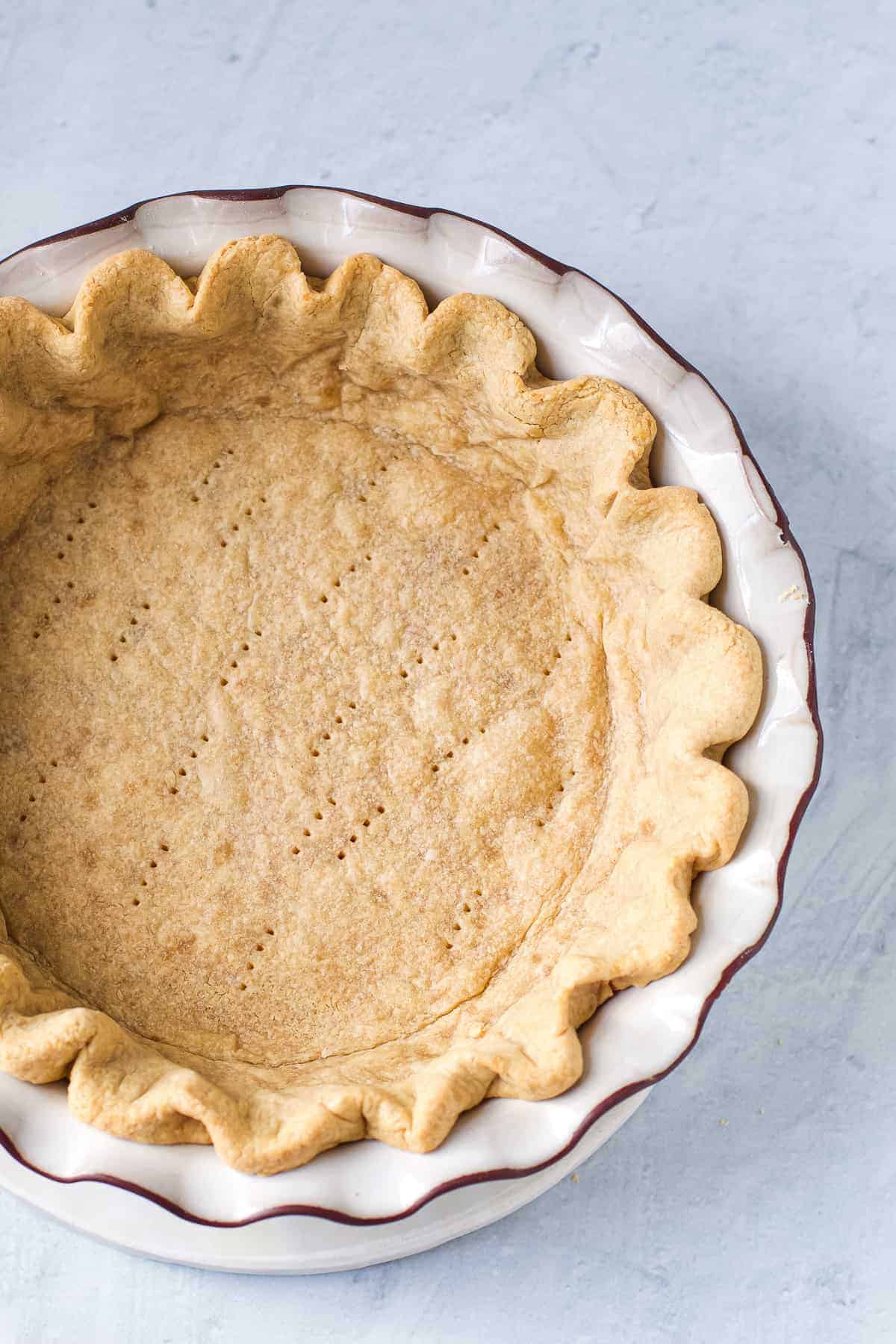 The Art of Blind Baking

There are few skills more important in pie-making than ensuring that the pie crust gets baked properly. A properly baked classic pie crust should be flaky, a bit tender and fully baked from the crust on down to the bottom. Nobody wants a soggy bottom, that's for sure! Many people are intimidated by blind-baking a pie crust, but it's actually quite simple to do if you follow a few easy tips and tricks.

But first, there are a few different ways to name the act of blind-baking a crust, and it may seem confusing to figure out what all these different names out there. Some people refer to blind baking as par-baking. They mean the same thing in the sense that you are partially baking the crust before you fill it. But par-baking technically refers to a partial blind bake of the crust, meaning that you only partially bake the pie crust instead of a full blind bake, which means that the crust is entirely baked without the filling.

A pie crust should be fully blind-baked if the filling is of the no-bake variety. Meaning you bake the pie crust entirely, and then fill it with something, such as chocolate pudding or vanilla pudding.

A pie crust might be partially blind-baked first when it is intended to be filled with a pie filling that is baked at a low temperature, such as a quiche.

I find that there are only a few minutes difference in terms of baking time between these two baking distinctions. For a partial blind bake, I generally look to make sure the pie crust isn't at all raw, in that it's fully cooked, but just barely. For a full blind bake I look to see that the crust is flaky with a light golden color in the middle of the pie crust. 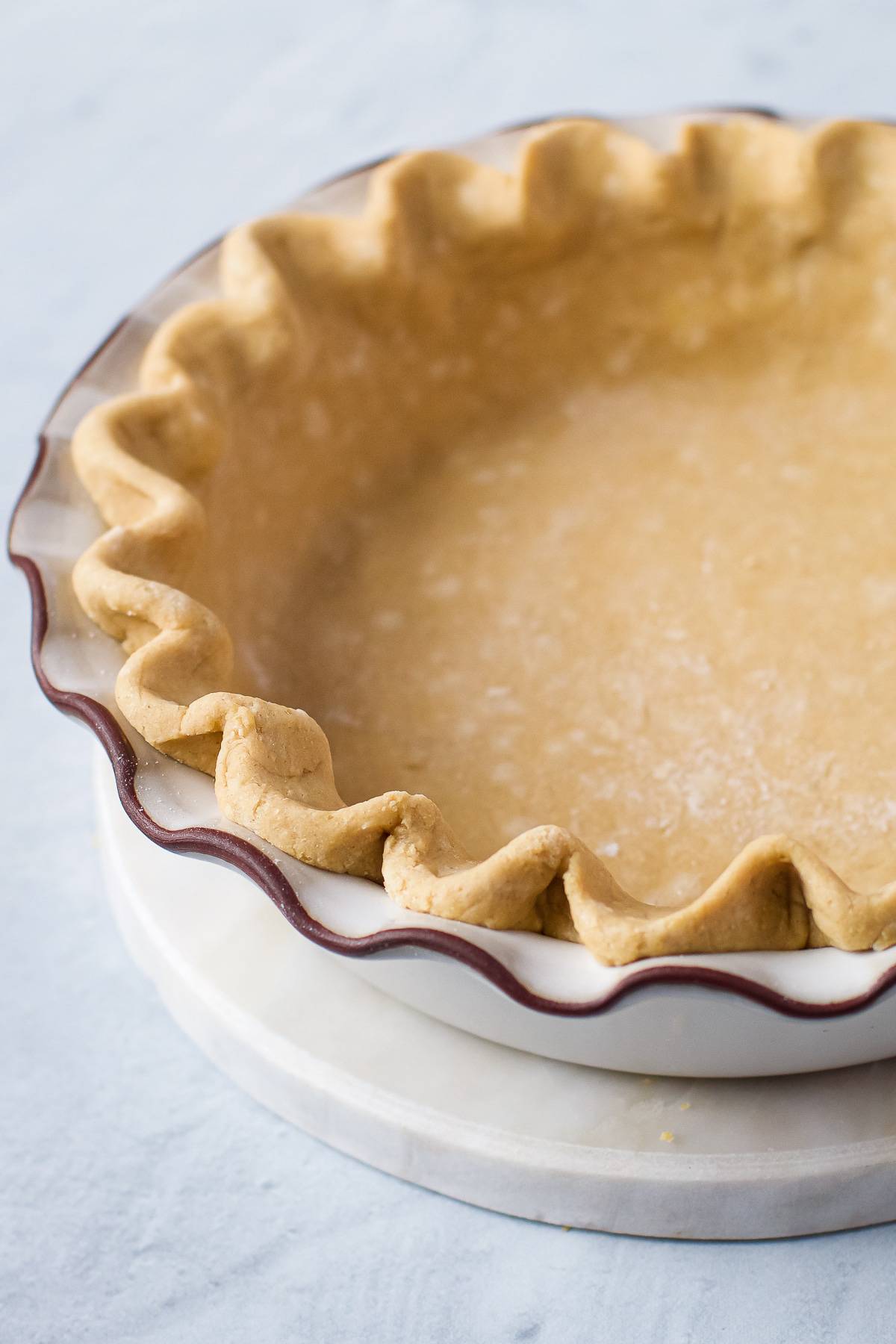 Nearly any pie that has a filling that needs to be baked below a temperature of 400ºF should be blind bake. The reason for this is because a pie crust, at least a classic butter pie crust, needs a long baking time at a high temperature in order to be fully baked through. 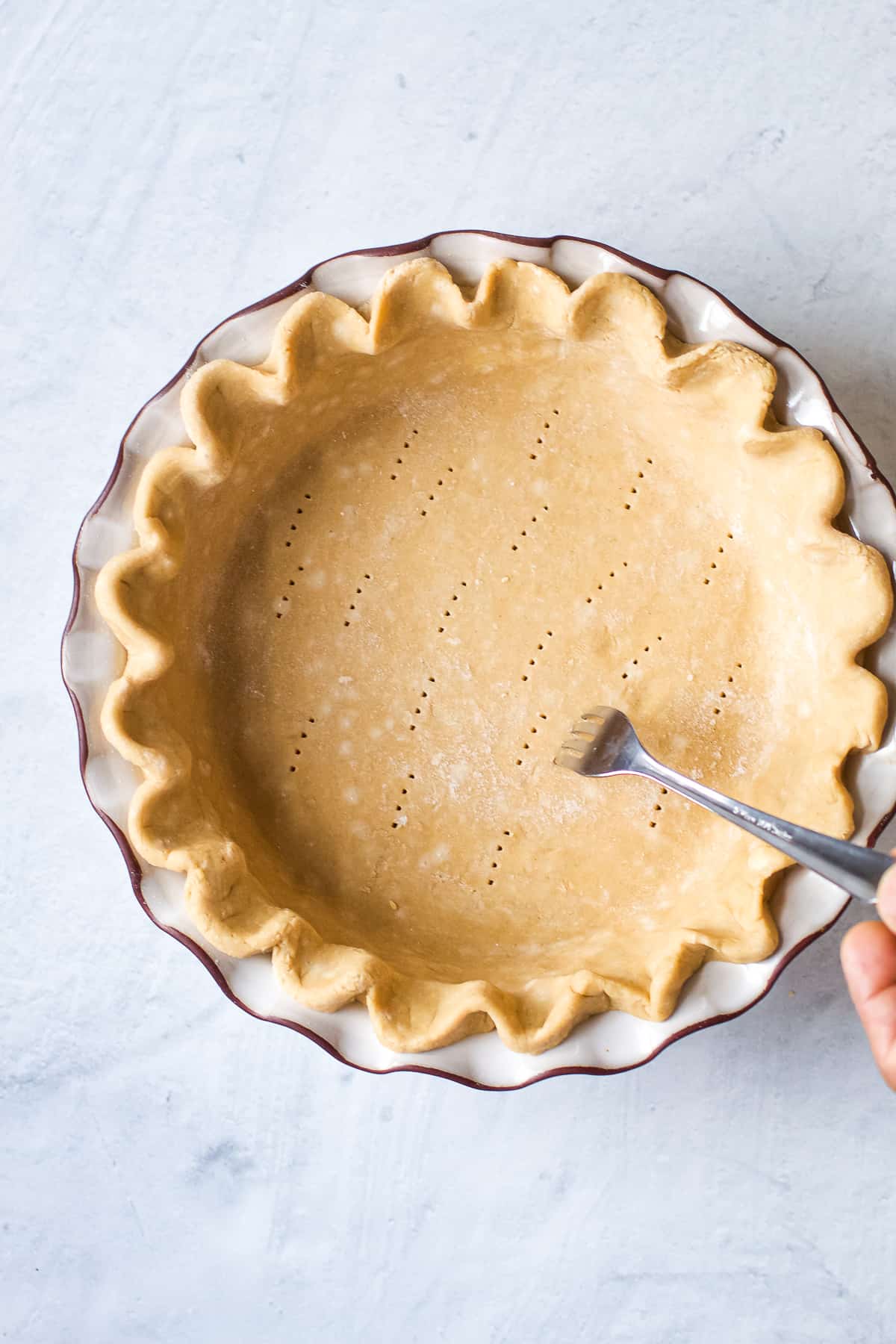 A basic pie crust that consists primarily of white flour and butter always benefits from blind-baking at 425ºF. However, if sugar is added to it, it's better to bake it at a lower temperature of 400ºF, to prevent the sugar from burning. Though, it will need to be baked for longer to ensure it's fully baked through.

Similarly, if a pie crust uses whole grain ingredients such as spelt or whole wheat flour, it's also best to bake it at the lower temperature of 400ºf and increase the length of baking time to prevent burning the whole grains. The photos in this post are of a whole wheat pie crust.

A crumb crust, such as a graham cracker crust, does not act the same way as a raw flour pie crust, but still can be blind baked to ensure it is crisp and that it holds together. It should be baked at the lowest temperature to blind bake of 350ºF for a short 10 minutes, or until it starts to get fragrant in the oven.

You don't need a lot of tools, and in fact, I own nothing special for this. Some people like to use specially purchased pie weights, but I don't find them as helpful as using dried rice and beans. I like to use dried rice and beans because they are smaller, and can really pack into small crevices and do a great job holding up the edges of the crust so they don't sink down. I keep the same rice and beans for many years and reuse them to blind bake pie crusts. Occasionally they will get too oily and they will need to be replaced. And over the years I add to the collection of blind baking rice and beans as needed, and by the time I am ready to replace the batch I've been holding on to there are all different types of dried legumes and grains included in them. I've used everything from dried peas, to quinoa to forbidden rice.

Here are the tools I use to blind bake a crust: 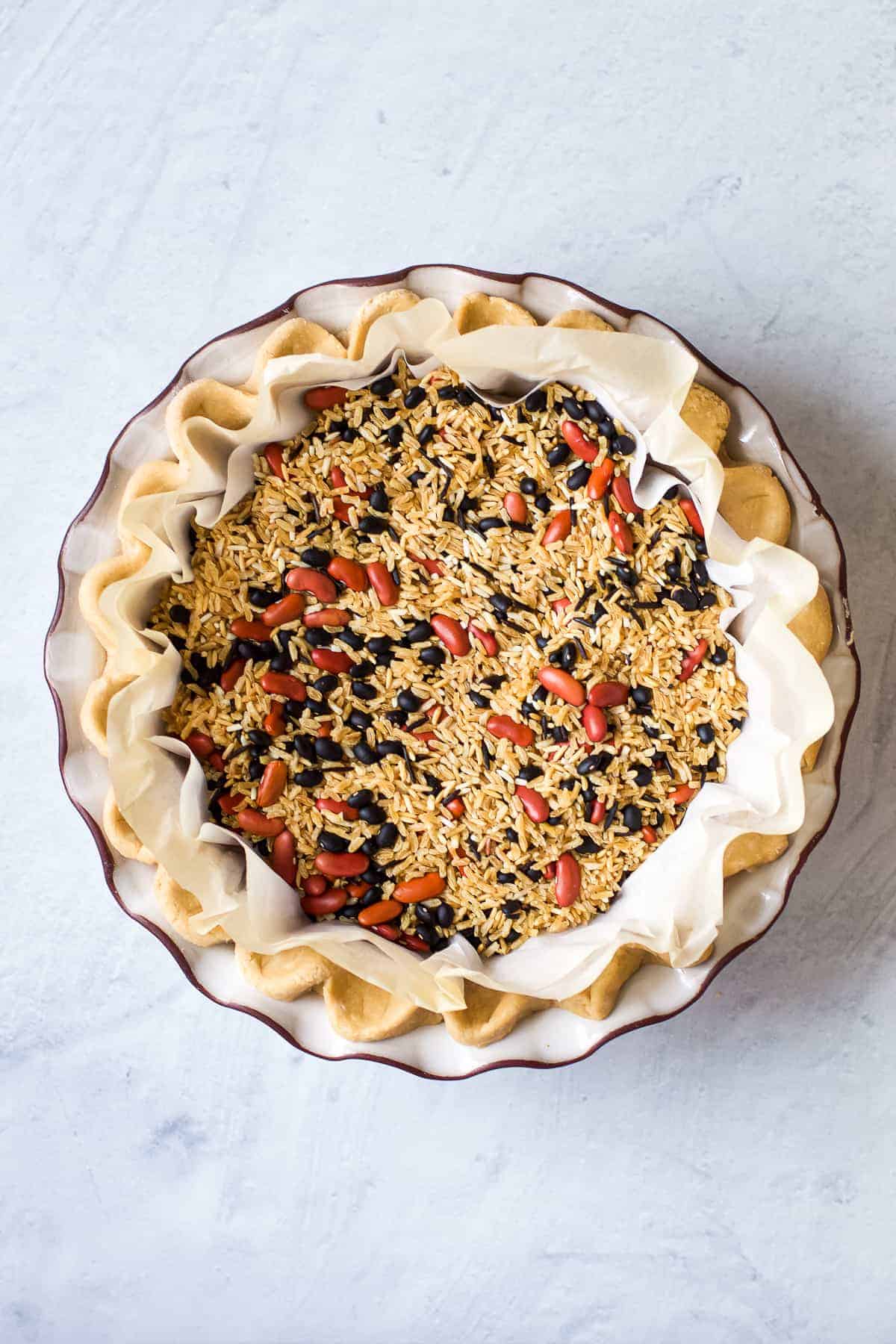 So now you know why and what types of pies to blind bake, let's talk about the important steps needed to actually do it! 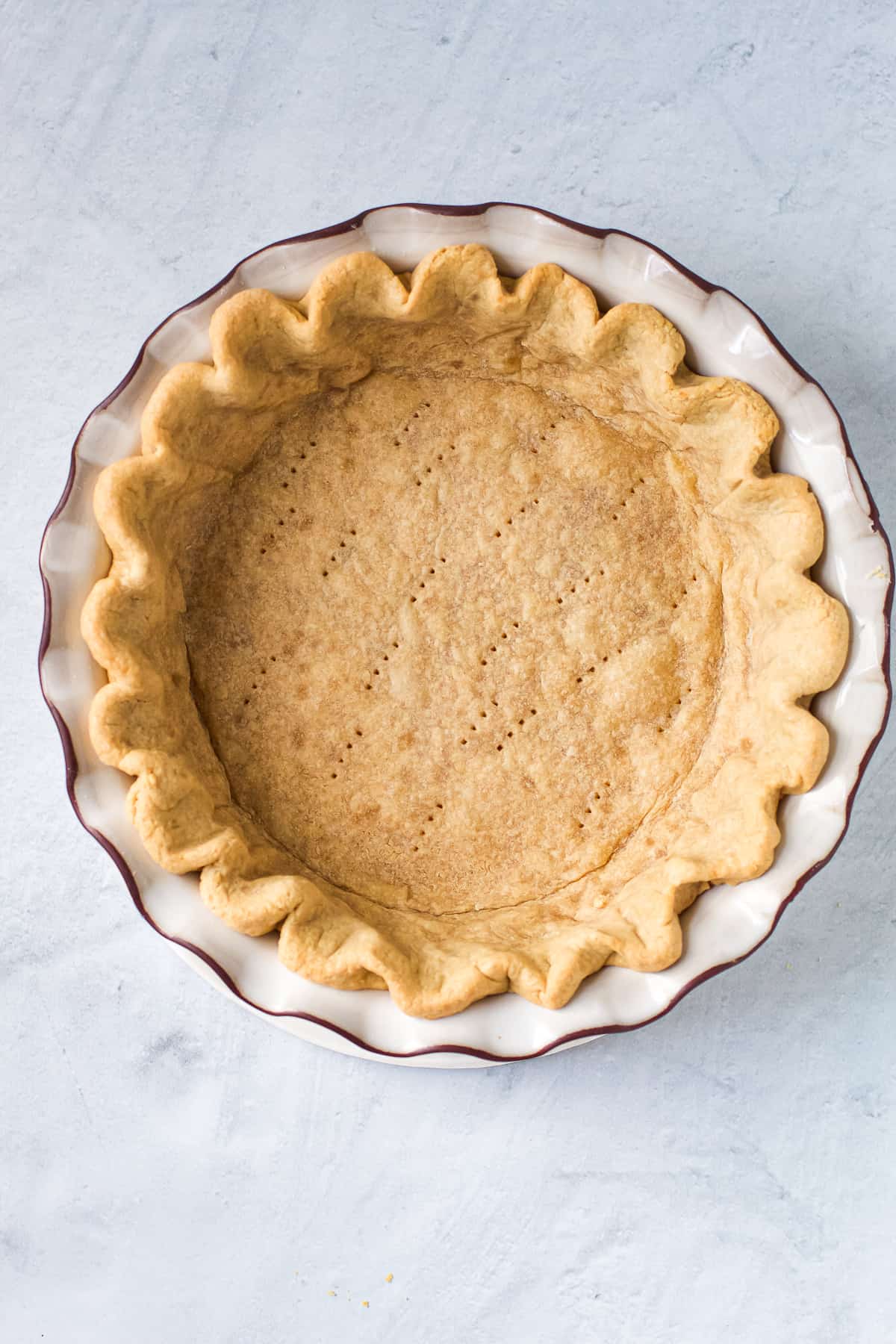 Q: Why did the sides of pie crust sink in?

A: This happens for a few reasons. The first possibility is that your pie crust wasn't chilled enough. If the butter is too soft, your crust will melt before it has a chance to actually bake. Pie crusts must be chilled before baking.

A second possibility was that the oven was at too low of a temperature, and similarly to the butter being too soft, the crust melted before it has a chance to bake.

A third and more likely case is that the sides weren't supported enough. Make sure that the parchment paper is pushed directly up against the sides of the crust, and the pie weights are supporting them. This is crucial to ensuring your pie crusts edges don't sink in before they get a chance to fully bake and stabilize.

Q: What will the pie look like when it's fully baked?

The pie crust is light in color on the bottom, but I followed the time in the recipe! Why?

Q: My pie crust wasn't done in the time indicated for the recipe. Help!

Q: The pie crust didn't keep it's shape when baking. Why?

A: There are two possible reasons for this. The first is that the pie crust wasn't completely chilled. If the butter is too soft, your crust will melt before it has a chance to actually bake. Pie crusts must be chilled before baking.

The pie dough also may have been overworked. If the pie dough is overworked, the gluten is fully activated the pie crust will shrink and become misshapen during the bake.

Q: What do I do after the pie crust is blind baked?

How to Blind Bake Pie Crust 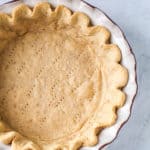