A Swiss Meringue is a fantastic technique for any pie calling for a meringue. It's made by heating egg whites and sugar together, slowly over a double boiler, and then whipping it up in an electric mixer until it's fluffy. It's a stable meringue and perfect for piping. 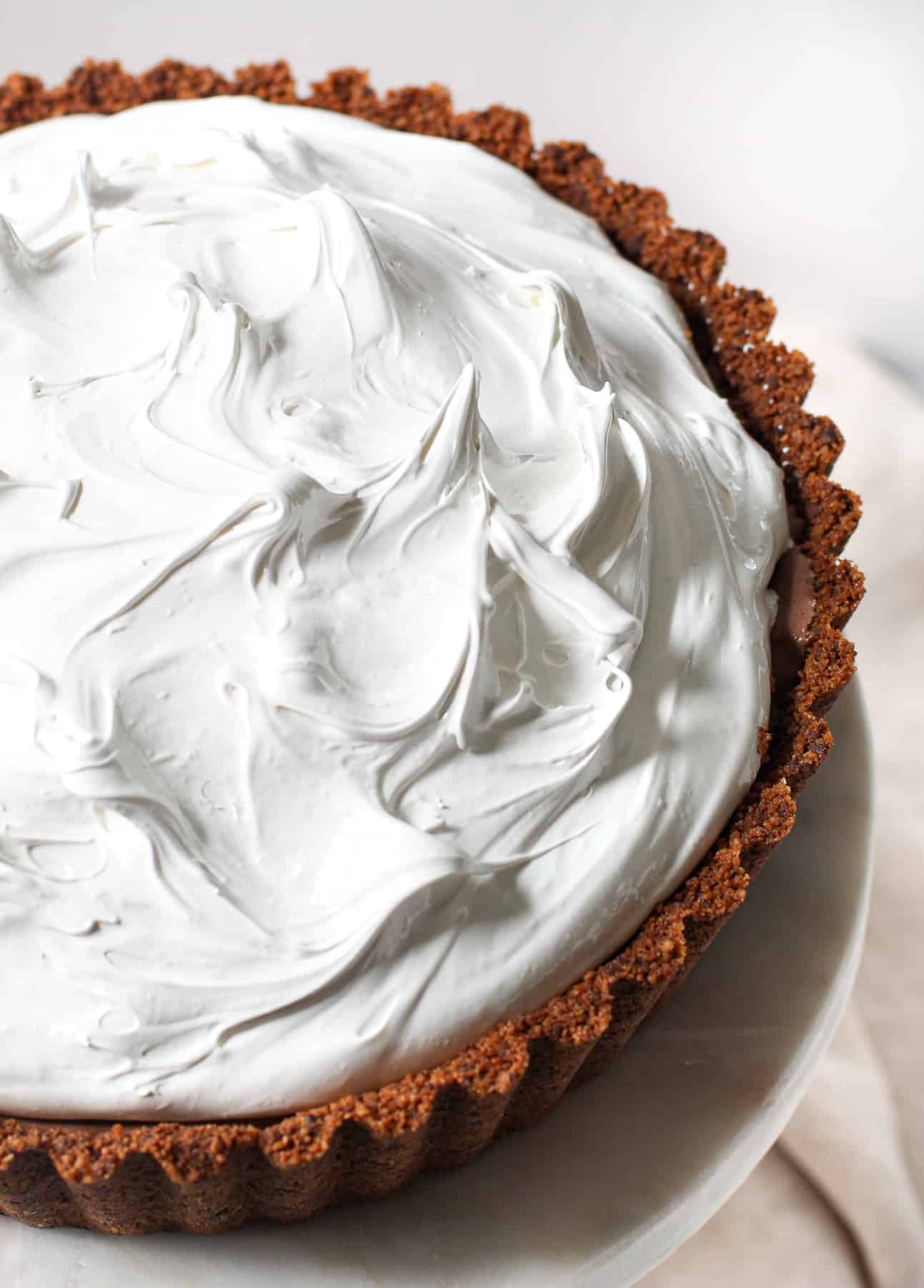 This Swiss Meringue recipe is not only a superb topping for a pie, but can be used for making meringue cookies. Eat it straight from the spoon, too, for a quick treat! Really, it's that good! Plus, making this will have you feeling very accomplished because you not only made a meringue, but you made a Swiss Meringue, which sounds oh so fancy! 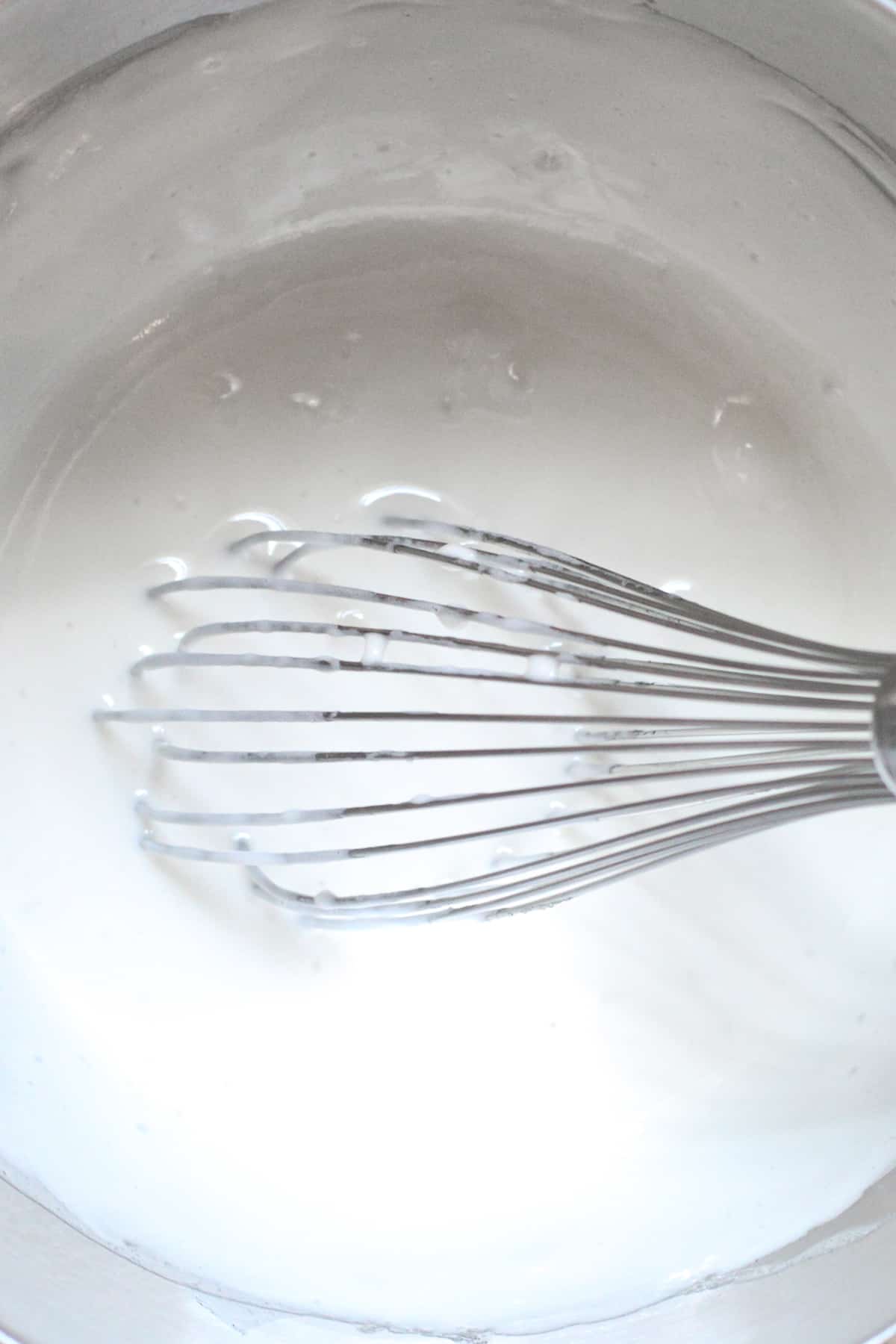 Here is what the egg whites and sugar look like after they have been cooked.

What is a Meringue?

A meringue is a mixture of egg whites and sugar that is beaten until light and fluffy. A meringue has many uses. It can be used to make cookies, or a pavlova, by baking up the meringue for a long period of time. It can be turned into buttercream by adding chunks of butter to the warm meringue while it is beating. Or, it can be used to top a pie. You can also take the meringue one step further by torching it, or placing it under the broiler. This turns the meringue a beautiful dark color and gives it a toasted flavor.

Methods of Making a Meringue

There are three common ways to make a meringue. 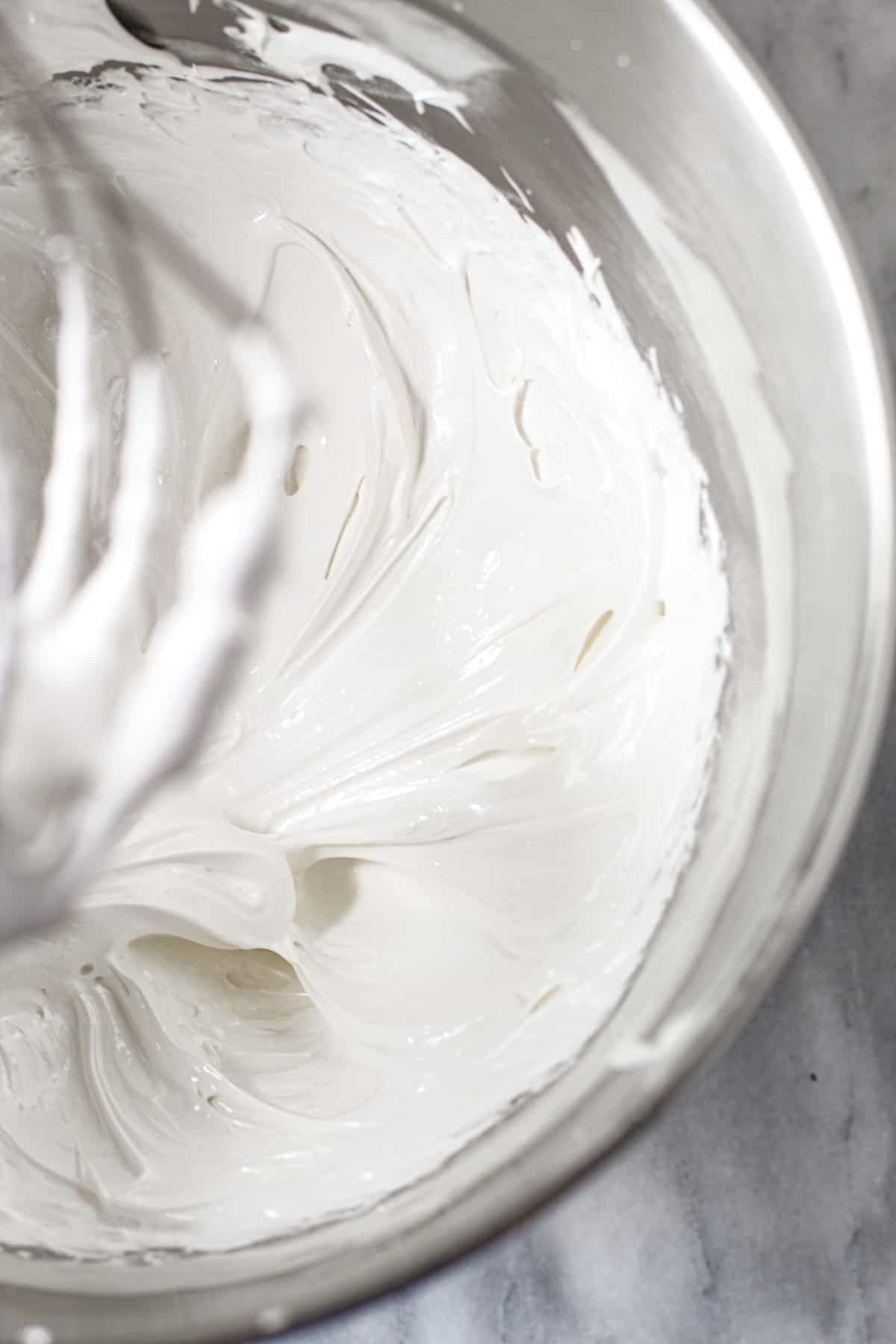 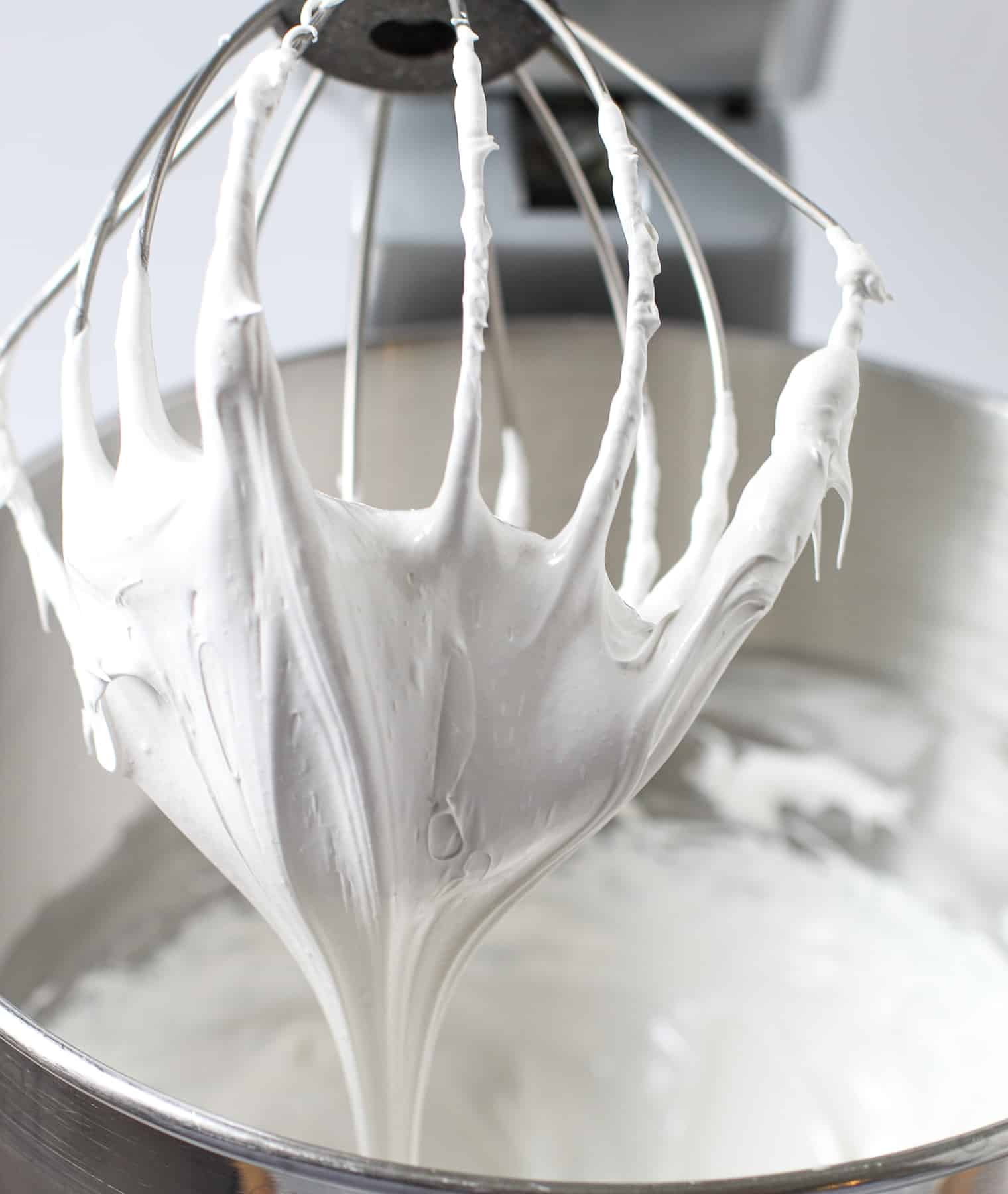 How To Make a Swiss Meringue

First, you are going to set up a double boiler: This means to fill a pot with some water at the bottom to create a steam bath to slowly cook whatever is in the bowl on top.  I use the bowl for my electric mixer and set it on top of a small pot. A small pot works best because it only heats the bottom of the bowl and not the sides, which I find useful for preventing any crystalized sugar.

Next, whisk together all of the ingredients of the meringue in the bowl of your mixer. Whisk them until they are a little frothy and then set them over the pot of simmering water.

Cook until egg whites reach a temperature at 160°F, which takes roughly between 8 and 10 minutes, depending on the size of your pot below the bowl. I find it useful to use an instant read thermometer because it reads the temperature quickly. If you are really stuck and don't have a thermometer, cook the egg whites until the sugar has fully dissolved and the mixture is thickened and started to get glossy.

Transfer the mixture to a stand mixer fitted with a whisk attachment and add the optional scraped vanilla bean. Whip the cooked egg whites on medium high speed, until the meringue becomes glossy and begins to pull away from the sides. You'll also notice the bowl has cooled down significantly and this helps you know the meringue is ready. This takes roughly 8 minutes.

At this point, the meringue is done! You can pipe it to make cookies or a pavlova! Top your pie and torch it! Use it on ice cream. Or eat it right up.  There are so many options! 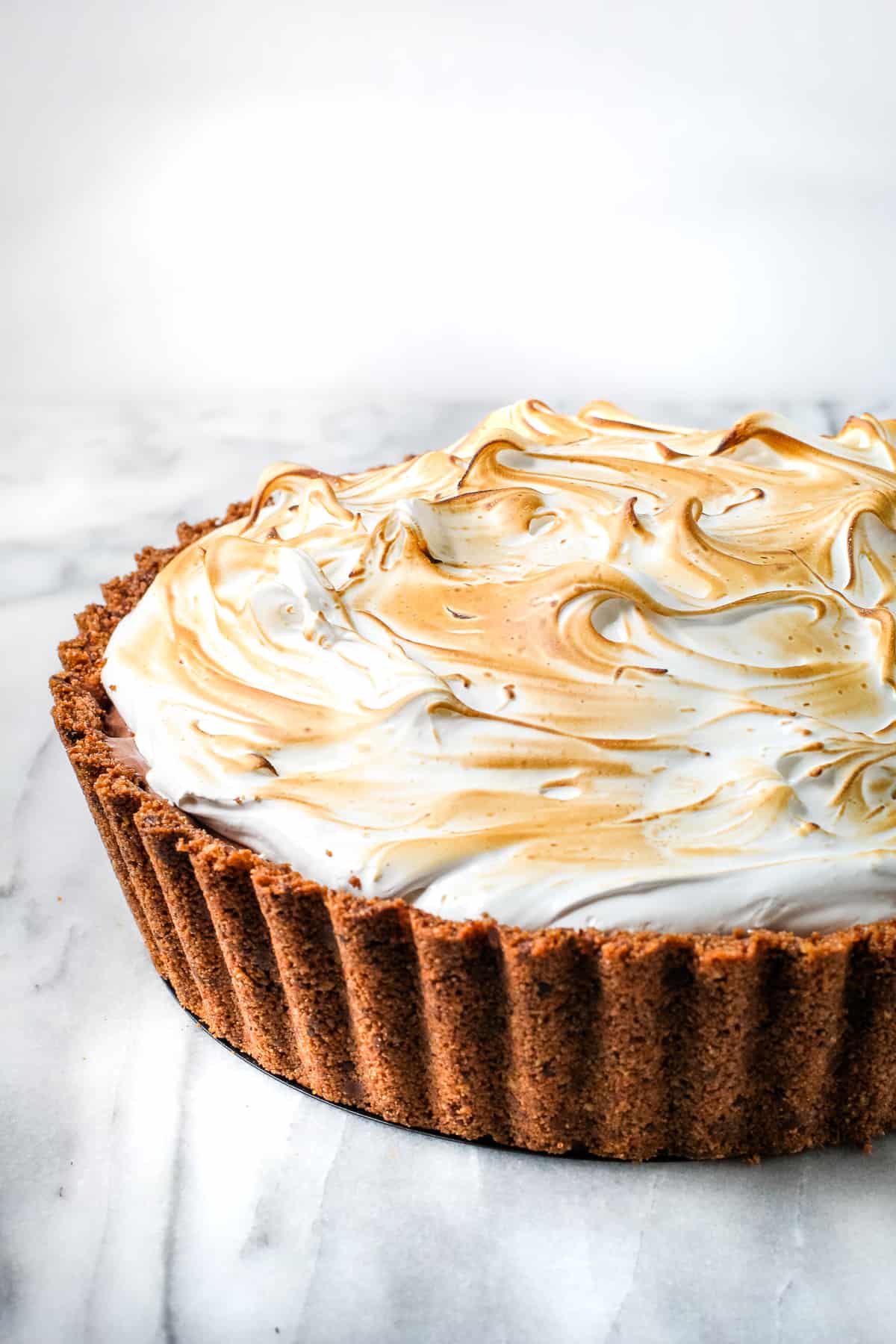 MAKE SURE TO TAG @EVERYDAYPIE ON INSTAGRAM AND COMMENT BELOW IF YOU MAKE THIS SWISS MERINGUE OR IF YOU HAVE QUESTIONS ABOUT THIS RECIPE!

A Swiss Meringue is perfect for topping any pie calling for a meringue. It's made by heating egg whites and sugar slowly over a double boiler, and then whipping it up in an electric mixer until it's fluffy! It's a stable meringue and perfect for piping.

Looking for some seasonal inspiration to highlight your dessert table at Thanksgiving? This list has over 45 recipes for Thanksgiving pies!