END_OF_DOCUMENT_TOKEN_TO_BE_REPLACED

Step aside plain old apple pie, this Cinnamon Roll Apple Pie will win out every time. A flaky crust is filled with the best apple pie filling and topped with mini cinnamon rolls made from pie crust and baked up perfectly. Drizzle it with a cream cheese glaze and prepare to be blown away by how amazing this pie is. It tastes as good as it looks! 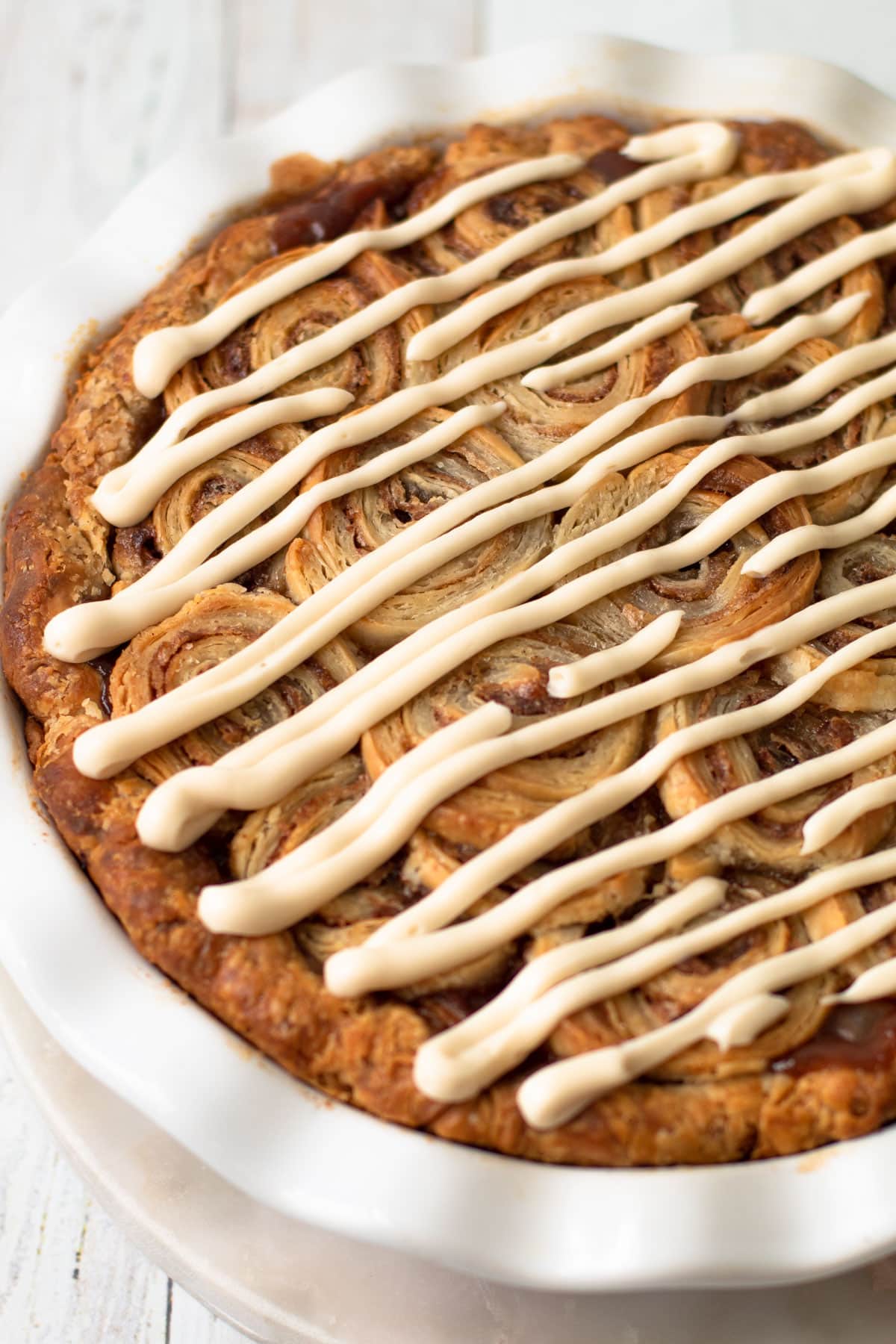 We all can agree that Apple Pie is one of the best pies out there. And we all know, cinnamon rolls are amazing. So, when you combine these two flavors in one pie, it’s guaranteed to be a huge hit! This Cinnamon Roll Apple Pie may be a bit over the top, but it’ll prove it’s worth after the very first bite.

The cinnamon rolls are actually just made from the pie crust, simply by rolling out the dough and filling it with a thin layer of butter, cinnamon, and brown sugar. They’re sliced to look like little cinnamon rolls and baked directly on top of a classic apple pie filling. The whole thing is drizzled with a quick cream cheese icing to really gild the lily.

This pie really brings that wow factor. It’s a fun baking project, easily broken down into steps that are worth the effort needed to make it. Let’s get baking, shall we?

Tools Needed for this Recipe

Here is a list of some of the major tools I used in this recipe. You won’t necessarily choose to use them all, but they are exactly what I used here. The links may contain affiliate links.

For pie, you want to have an apple that can hold it’s shape, has a nuanced flavor, and a slight tartness to break up the sweetness of the sugar. Using a combination of apples is helpful because it introduces a few different types of flavors and textures to the pie. Gala and Granny Smith apples are both good choices for apple pie because they don’t get mushy after a long bake in the oven, and they have a sweet and tart flavor to them.

Here are some options for baking apples:

Apples have a ton of moisture. When the apples are cooked, they release their moisture and then shrink. When you bake an apple pie, naturally the apple filling will first puff up and then as it cools, it shrinks.

To avoid the filling from sinking too much and destroying the cinnamon rolls, it makes sense to pre-cook the filling.

Precooking the filling ensures that the apples are properly cooked, with the correct added thickener amount. This not only helps prevent any large gap between the crust and the filling, but it also reduces the actual baking time of the pie.

Without precooking, it might take more than an hour for this pie to fully bake. Because the apples are already cooked, the only thing you need to be concerned with during the bake in the oven is that the top and the bottom crust are fully browned and baked.

The little cinnamon rolls on top of the crust are created by rolling out pie dough to a rectangle, lightly spreading on butter, sprinkling it with cinnamon brown sugar, then rolling them up.

After the cinnamon roll log has been rolled up, it’s best to place it in the freezer to firm up for about 10-15 minutes. This step ensures that when you slice into the pie dough it doesn’t squish the cinnamon rolls down. This will help to form a rounded cinnamon roll. However this is optional and can be skipped if you don’t care about how the cinnamon rolls look, or you just don’t have the time.

Next, the cinnamon rolls are placed in a concentric circle on the pie. It’s okay to overlap slightly to try to eliminate any large air holes.

Just trust me when I say, don’t skip the glaze! I tried to make this step as simple as possible by putting it together by hand, especially since it’s a small amount of cream cheese glaze needed.

To make it, mash together the cream cheese and powdered sugar. When you get started, you’ll feel like it will never come together, but it will. Once it looks like a paste, take a whisk and vigorously whip it together until it’s creamy.

It’s best to pipe this glaze. If you don’t have a piping bag, you can simply fill a plastic storage bag with the glaze and cut off a little hole in the corner, then pipe it on.

As with most pies, there are a few steps you need to complete to get to the finished product. A lot of these components can be broken down into steps and done ahead of time.

Make the Pie Dough Ahead

You can make the pie dough ahead of time. You can prepare the dough up to 2 days ahead, or up to 3 months in the freezer. You can roll out the pastry up to 1 day ahead of time. Roll out the bottom crust and place in a pie pan. Keep in the refrigerator, covered completely, until you are ready to make the pie. And make the cinnamon rolls at the same time, and cover completely.

Make the Apple Pie Filling Ahead

The entire filling can be made up to 7 days ahead of time. It can even be frozen for up to 3 months!

Prepare the Entire Pie Ahead of Time

Fruit pies are great to prepare ahead of time in totality, up until the point of baking. To freeze this pie, place the whole pie on a sheet pan first, and place in the freezer. Once frozen (at least 12 hours), wrap the whole pie in plastic wrap VERY TIGHTLY twice, and then cover with aluminum foil. Don’t forget to label it!

It is best to cook any frozen pie within 3 months, because the longer it is stored in the freezer, the less pronounced the flavor is. However, you can wait as long as about 1 year if frozen properly.

How to Bake it From Frozen

You can actually bake a fruit pie directly from the freezer. In my opinion, doing this is even better than a fruit pie baked from fresh. The reason being that the crust has a chance to cook first, before the filling does, so you can ensure you have a beautifully crisp crust and perfectly cooked filling, even for this pie with a pre-cooked filling.

Step aside plain old apple pie, this Cinnamon Roll Apple Pie will win out every time. A flaky crust is filled with the best apple pie filling and then topped with mini cinnamon rolls made from pie crust and baked up. Drizzle it with a cream cheese glaze and prepare to be blown away by how amazing this pie is. It tastes as good as it looks!

Fill and Bake the Pie

The body of this post has a lot of information about this pie, reference that if you have any questions!

Welcome to Everyday Pie!
I’m Kelli, and welcome to my space where I share all about pie! You’ll find not only recipes for easy pies you can bake on any day of the week, but also baking and cooking basics that will get you to where you can create your own pie with what you have on hand anytime. Read more here 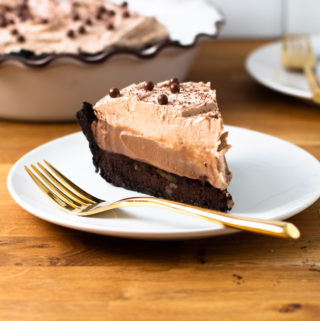 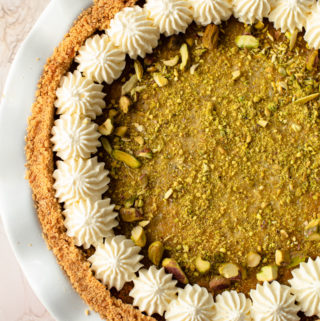 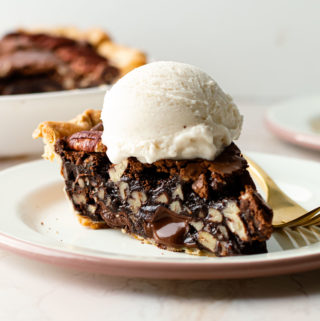