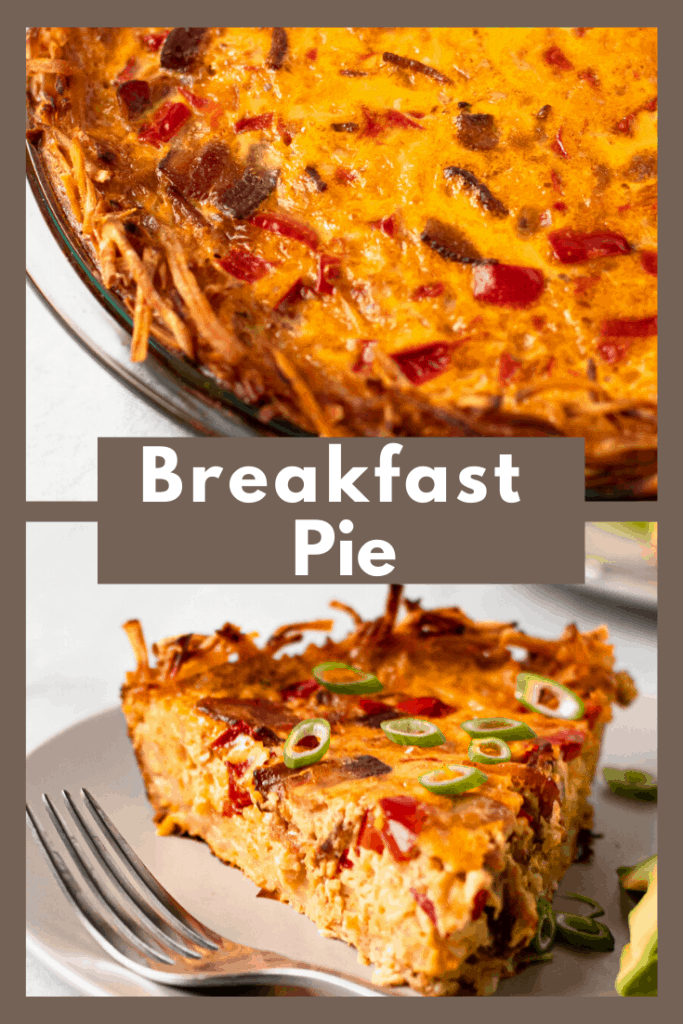 This Breakfast Pie is the perfect beginning of a day! It starts with  a crust made from hash browns and then filled with bacon, peppers, eggs and cheese. It's hearty, wholesome and delicious and made to be served for a special weekend brunch or even meal prep for the week! 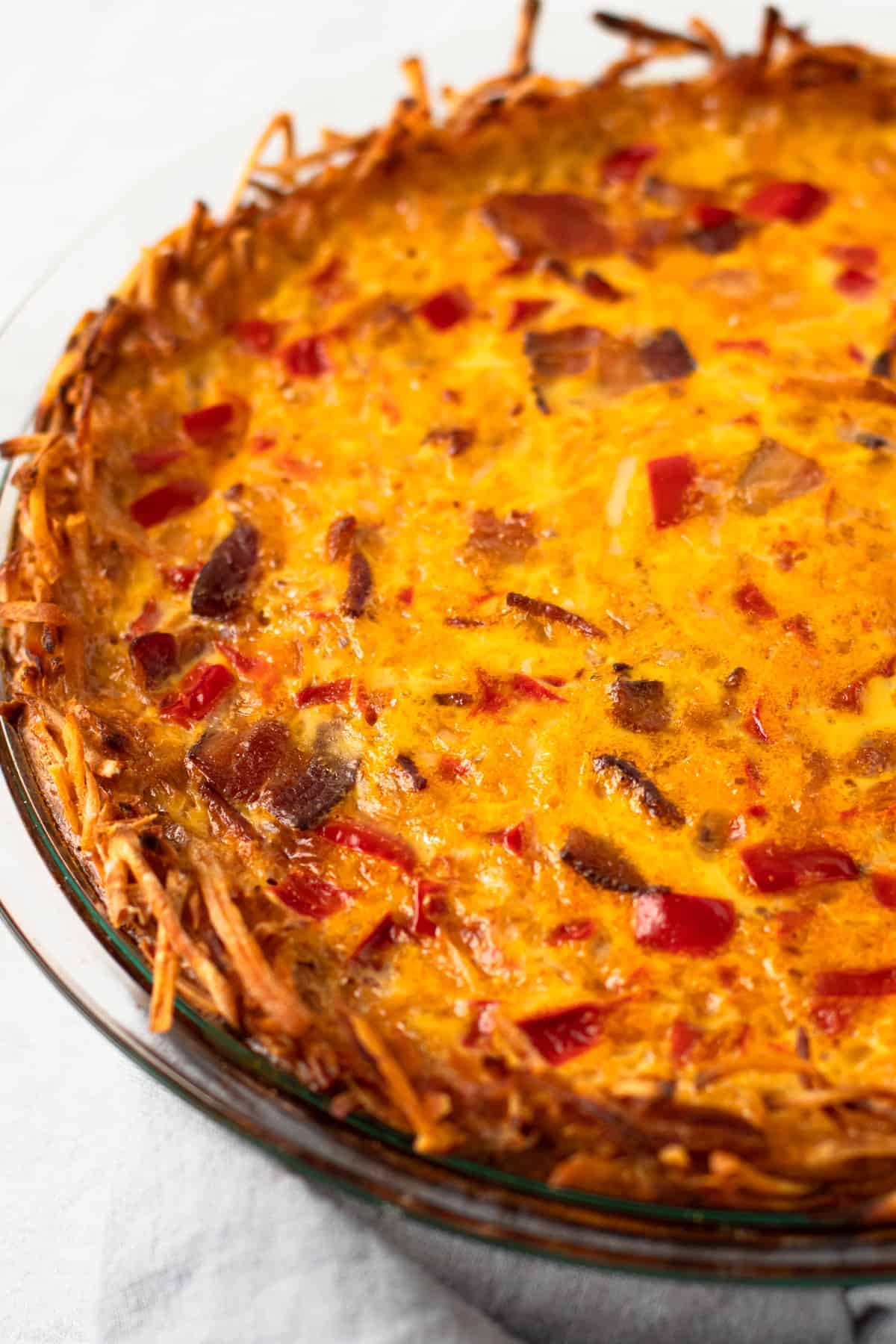 Ever wanted pie for breakfast? While this Bacon, Egg, Pepper and Cheese Pie makes it totally acceptable to do so! Although to be fair, I've had my fair share of Cherry Pie or Strawberry Cream Pie for breakfast too. But this pie is made to be for breakfast! It starts with an easy-to-make shredded potato pie crust, and then it's filled with a creamy bacon, cheese and pepper quiche filling. It's creamy and flavorful and unique enough to make it a special treat on the weekend. In our house, we make it on Sunday and my husband takes it to work each day for breakfast! So it definitely works as meal prep too. 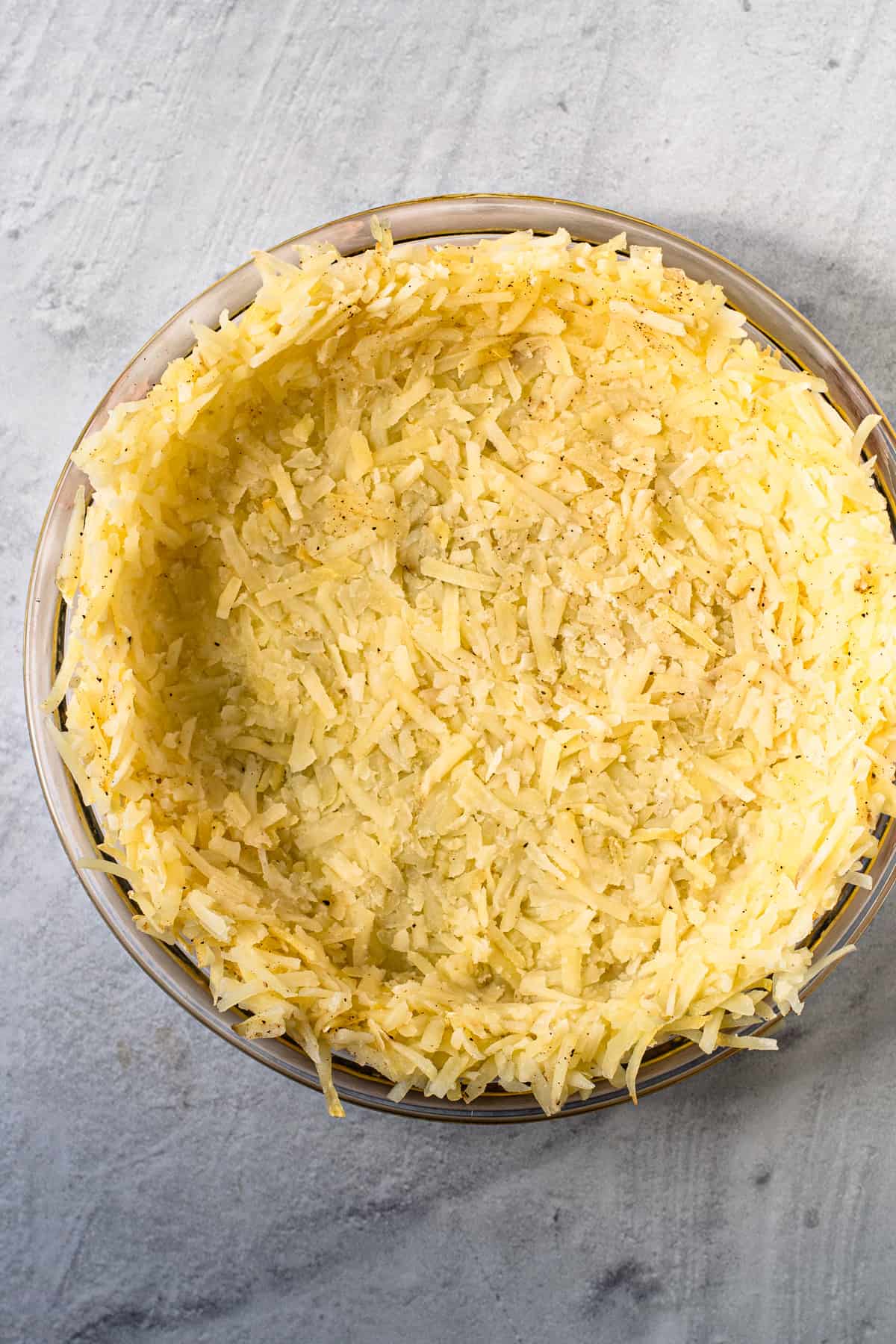 Here is What You Need To Make It 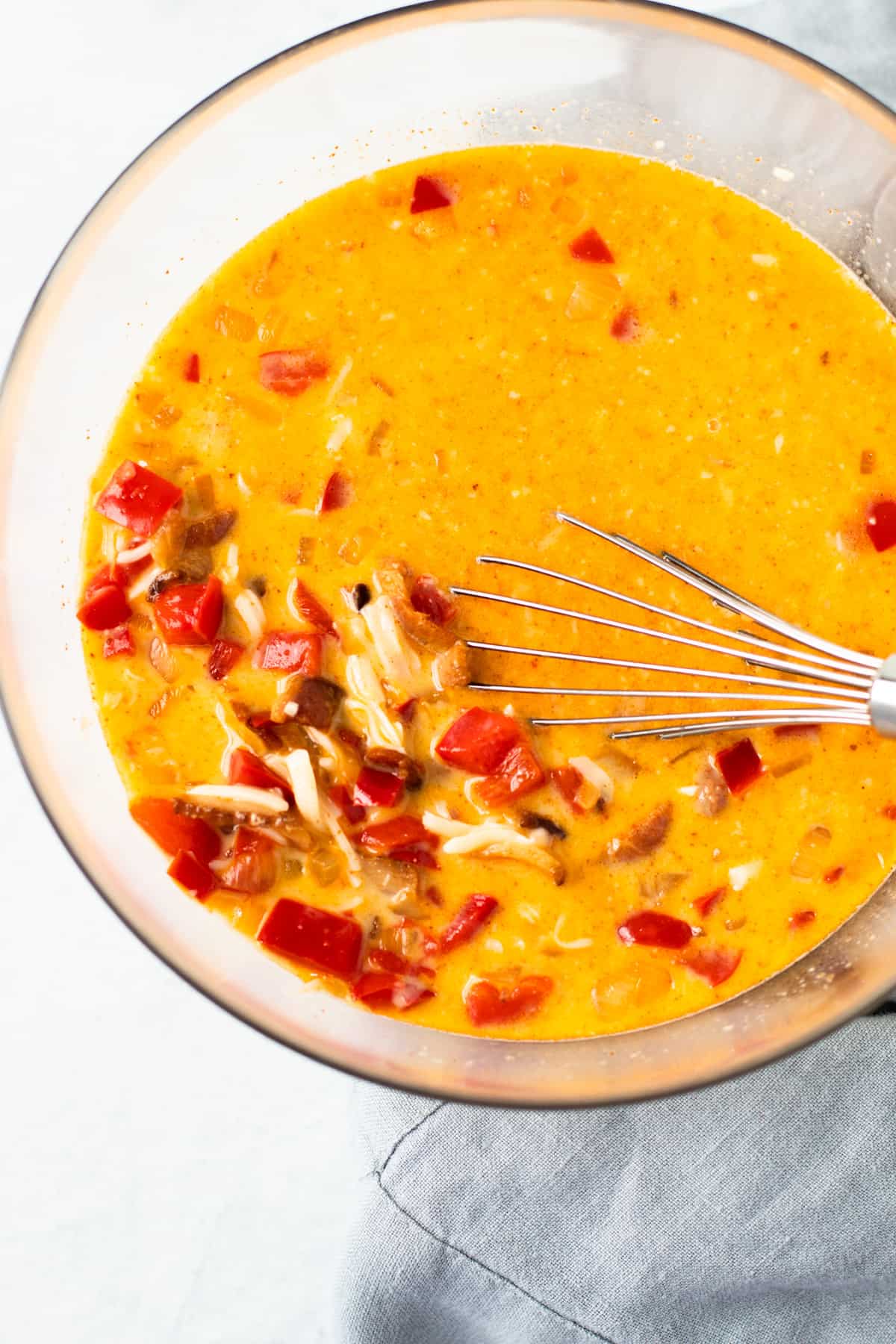 All About That Potato Crust

This hash brown crust couldn't be easier to make! It's primary ingredient is a bag of frozen hash browns that are baked in the oven to form a crust. This crust isn't really comparible to a typical pie crust as it will not stay crisp. It is, though, a delicious component that makes this a healthier, and easy-to-bake pie to serve at breakfast or as meal prep throughout the week.

To make the crust, you simple pour frozen hash browns into a pie container and bake. Halfway through the baking time, when the potatoes are par-cooked, remove from the oven and form the crust carefully with a spoon. Then return back to the oven to finish the baking.

Once it's finished cooking, the bacon, egg and pepper filling is poured into it and the whole thing is baked up!

This Breakfast Pie recipe falls into the quiche category. Recipes for quiche can vary wildly; some having a lot of heavy cream or milk and loads of cheese making them taste very rich; while others are heavier on the eggs making them a bit lighter. This one is a bit on the light side, skipping the cream all together. Instead of relying on the richness of a heavy dose of cream, this pie puts its trust on a good flavor combination and proper seasoning.

Additionally, the best way to bake a quiche is at a low oven temperature of 350ºF (compared to other pies that rise well above that mark). This makes the pie feel a bit more creamy because the eggs don’t puff up as quickly, and it gives the top a smooth finish. 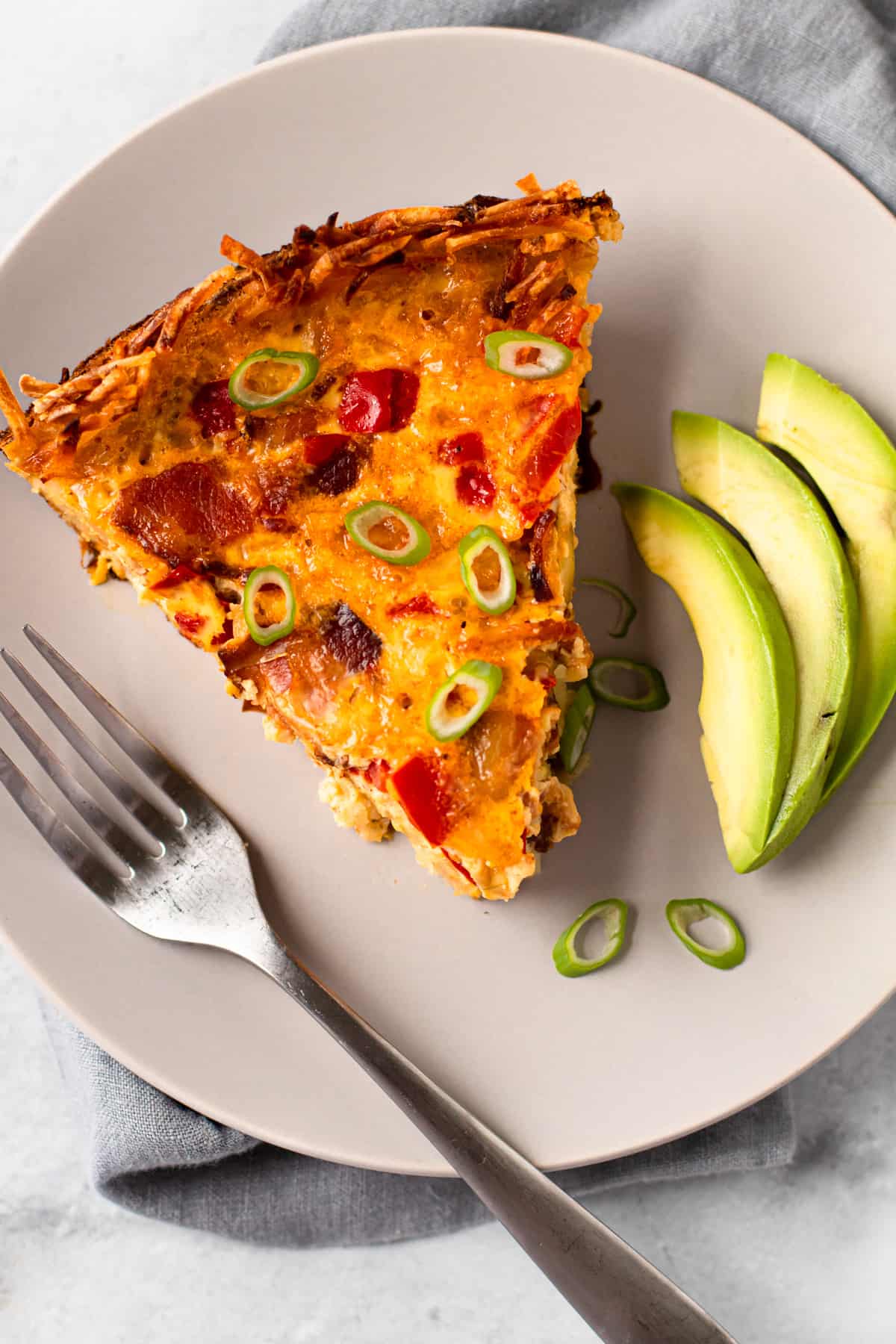 This pie is great as a way to meal prep breakfast. Properly cool the before before storing in the refrigerator in individual portions. The pie can be heated up either in the microwave or in the toaster oven. It will keep well for about 3-4 days.

As noted above, the potato crust ultimately does not stay crisp on the bottom as a typical pie crust would. But the edges of the potato crust will crisp back up if you reheat in a toaster oven. 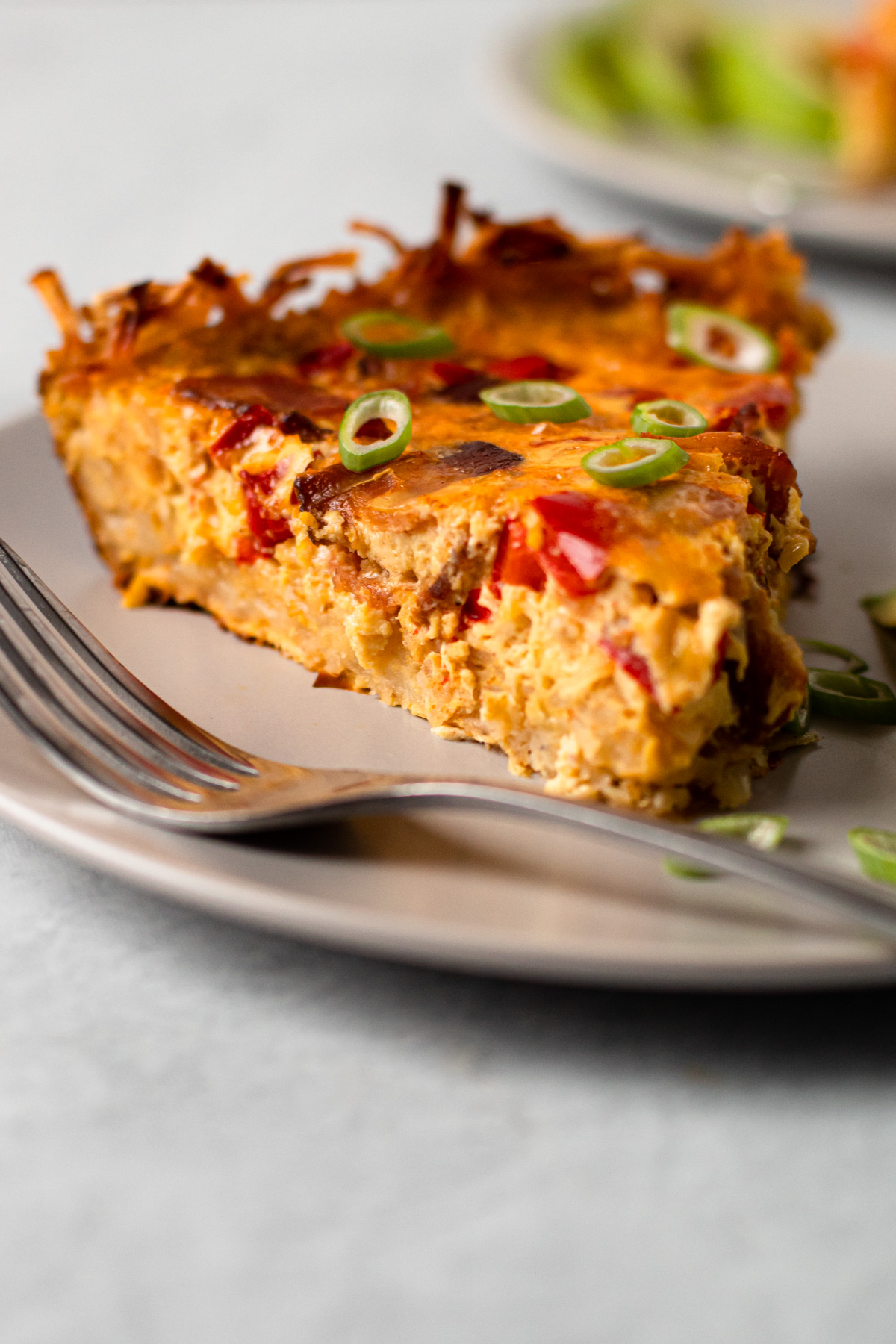 Make sure to tag @everydaypie on Instagram or comment below if you have any questions about this Breakfast Pie or if you make it! I love to see it!

This Breakfast Pie starts with  a crust made from hash browns and it's then filled with bacon, peppers, eggs and cheese. It's hearty, wholesome and delicious! Perfect for a special weekend brunch or meal prep for the week!

To make this as meal prep, properly cool the before before storing in the refrigerator in individual portions. The pie can be heated up either in the microwave or in the toaster oven. It will keep well for about 3-4 days. The potato crust ultimately does not stay crisp on the bottom as a typical pie crust would. But the edges of the potato crust will crisp back up if you reheat in a toaster oven.